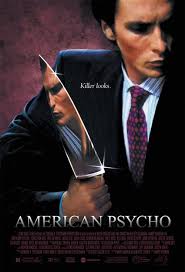 It had been perhaps a week since my tenth grade obsession had come back in the form of innocent interest. In that week I had watched snippets of Little Women in addition to the film itself. I had learned to appreciate the film in contrast to my first viewing of Louisa May Alcott’s classic in which I thought it to be a clichéd Victorian tale of love and feminism. The story was great, but more so the actors portraying the characters, namely Christian Bale as Theodore “Laurie” Lawrence, were excellent. Despite enjoying the movie, my mind was already anticipating in revisiting another classic: American Psycho.

Originally released on April 14, 2000, I had first seen American Psycho about ten years after its release date in tenth grade, per say my obsession with Christian Bale.  My first introduction to the movie was a collaboration of gifs, memes, and a myriad of forums analyzing peculiar aspects of the film. Suffice to say, my expectations for the film had been very high. Unfortunately, after watching the film, I thought it was good, but slightly overrated. To an unexposed fifteen-year-old, the film was nothing more than a clever black comedy, with a few shining moments here and there; perfect for fans of Christian Bale. However, having decided to revisit the film at the age of twenty, I can say American Psycho has become one of my all-time favorite movies.

“I like to dissect girls. Did you know I’m utterly insane?”

Directed by Mary Harron, American Psycho plays on the notion of stereotypical 80s New York yuppies. The film revolves around the life of Patrick Bateman: suave and wealthy Wall Street investment banker by day, sadistic serial killer by night.  As dark as the film sounds, it’s actually a satire regarding the materialism, shallowness, greed, and narcissism of the rich folk on Wall Street.

“A satire regarding the materialism, shallowness, greed, and narcissism of the rich folk on Wall Street?” What the hell does that mean? Allow me to elaborate.

“Would you like to hear the specials? “Not if you want to keep your spleen.”

Yet it is with this humorous exaggeration Harron creates that the viewer understands today’s society holds great similarity to the society mocked in American Psycho. Today, many believe the golden age of yuppies to be over when it hardly is. If one were to examine today’s idiotic youths, that individual would notice that the yuppie gene, (even if their parents weren’t yuppies themselves,) has been passed onto them. Sex, drugs, money, and appearances—that’s what the majority of today’s bimbos care about, albeit different slang terms are used.

“I have to return some videotapes.”

The film takes a turn with materialism and narcissism when the running gag of mistaken identity is brought forth. Bateman and his buddies all look the same and are often mistaken for each other due to their nearly-identical styles of dress, hairstyles, cheating-on-spouses routine, dining choices, opinions, sexism, etc. In Bateman’s world of the rich, there are no “individuals.” There are only replaceable members of the same clan, everyone having fallen into the same shallow shell of a “yuppie scum.” They are conformists striving to fit in. And while this does make for an interesting joke throughout the film, Harron does this for a reason.

The effect of materialism presented in American Psycho is illustrated when towards the climax, Bateman begins to question his sanity, knowing “his mask of sanity” having slipped off. Although I won’t say exactly what happens, I can say that materialism and mistaken identity are linked to the murders he commits and his actions linked to his ever-increasing levels of paranoia, self-hatred, and insecurity. And in the end, the shallowness of people caring only for themselves is really shown when Bateman’s true identity is revealed…

“My pain is constant and sharp…this confession has meant nothing”

The cinematography in American Psycho is artistic in the sense of opposing forces providing excellent contrast. An example would be the colors of blood-red and elegant-white clashing together. Add to this the right bits of angle, shadow, contrast, and zoom-in of product and Harron essentially captures the eeriness, humor, and superficiality of both a yuppie and serial killer’s life.

“You’re not terribly important to me.”

The acting is hands-down phenomenal—especially the job that Christian Bale does. Despite often displaying a charismatic smile, Bale is able to embody an uncomfortable nothingness behind his cold eyes, a haunting tortured look perhaps. Without being overt about it, Bale is able to capture the simplicity and yet the complexity of emotional transitions in an unstable individual without it looking forced. You can describe his face as elastic with Bateman’s erratic behavior. And of course with his American accent to top it off, (Bale is English), Christian does an excellent job at displaying the typical businessman persona. The casting choices of Reese Witherspoon, Chloe Sevigny, Jared Leto, Willem Dafoe, and Justin Theroux are great as well.

From its smooth transitions to its flowing story-line and casting choices, Mary Harron has done an excellent job with American Psycho. And I am glad that as an adult, I am able to understand the satire and underlying complexity of the film. Having been adapted from a (much more) gruesome novel by Bret Easton Ellis, the film is tamer in nature, (still rated R though.) Although I still (heavily) do not recommend it for children, I highly recommend every adult individual to give this flick a try. My final verdict? A+