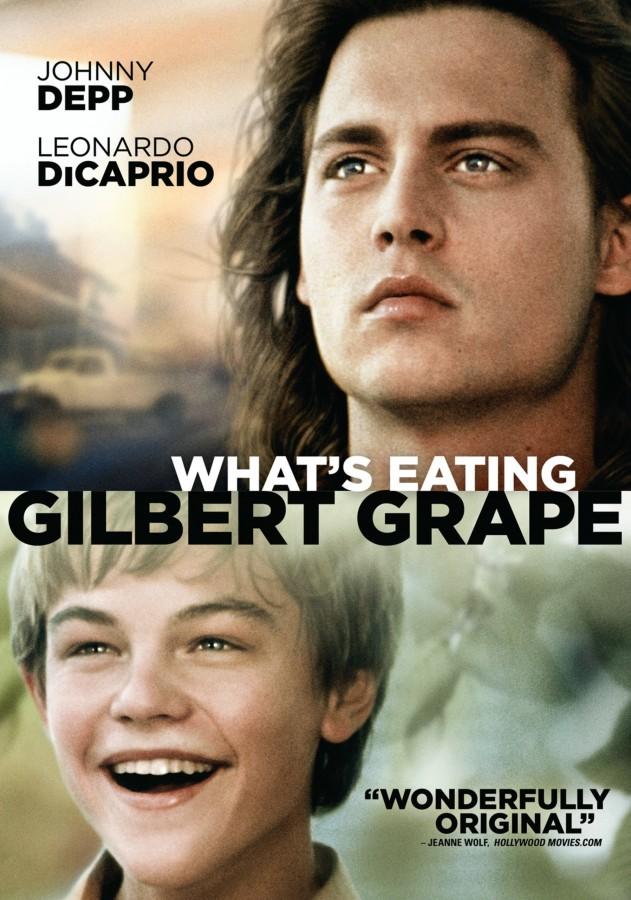 This week’s selection came about as part of a group choosing. My cousin had decided to sleep over, and with us, (brother, sister, cousin, and I), endlessly wandering around Netflix, we finally settled on what many deemed to be a ‘classic.’

Directed by Lasse Holstrom and based off a novel by Peter Hedges, What’s Eating Gilbert Grape revolves around a small-town young man, Gilbert Grape (Johnny Depp) holding a hefty load, (no pun intended), of responsibility. His main concerns include his mother (Darlene Cates) who is so overweight that she hasn’t left the house in seven years, and his mentally impaired, troublesome younger brother, Arnie (Leonardo DiCaprio). Add to the fact that he helps support his family through a job at the local grocery store and engages in an affair with an older and married woman (Mary Streenburgen), and you can only imagine the chaos threatening to push Gilbert off the cliff of sanity.

I had heard a lot about What’s Eating Gilbert Grape—that it a was a ‘must-see’ and an ‘all-time life-changer.’ You could say I had high expectations for this film. Because of the bar set high, I was a bit let down after watching the film. Don’t get me wrong, I thought the film was ok/good. However, definitely thought it could’ve been better.

“I’m having a birthday party, but you’re not invited, but you can come if you want.”

As part of my usual nagging, let’s start off with the main negative aspect of today’s review: the plot. Overall, there doesn’t seem to be an actual plot; the movie simply explores the

depressing life of Gilbert Grape. It’s as if the director wants you to feel sorry for Gilbert and waste a couple of boxes of tissues on cliché-induced tears. Because of this, the film seems to drag a bit. The film doesn’t have Gilbert overtly lamenting his life. Although light-hearted at times, the general vibe of the film is quite melodramatic. I mean, ok, Gilbert has a depressing life…and? Does he solve anything? Is there a solution? Adding to the negative aspect of the plot is the seemingly non-existent climax. Obviously, there is a climax, (which I will not spoil). However, the climax isn’t as big as it should be; it silently slithers into the melodrama of the rest of the film.

The positive? Number one is the acting. This was, (I think) my first time watching Johnny Depp in a serious role. You could practically feel his tortured, trapped soul oozing out towards you. Hell, it made me stressed out (although, I’m frankly not sure if it was more of Depp or the story). Overall, he was good. However, Leonardo DiCaprio stole the show by far. Leo convincingly portrays a mentally impaired child. He does not overact, nor does he underact. And DiCaprio really surprised me with this performance considering he portrays serious characters in most of his modern-day films, (haven’t seen The Wolf of Wall street yet, so bear with me)—but you get the idea! To watch DiCaprio as someone who’s constantly smiling, obnoxious, loud, troublesome, jumping around etc. really surprised me. Plus, keep in mind Leo was only nineteen years old at the time of filming—so DAMN!

could’ve been more clearly conveyed, I thought it was fantastic and relatable. In What’s Eating Gilbert Grape, the constant theme of man vs man and man vs self is emphasized. Here we see Gilbert stuck between having to choose between finally living for himself versus dedicating himself to his family. It’s such a complicated conflict that rests within all of us to various degrees. Although some of us may have more responsibilities than the other, this concept is one of many that links humanity together: struggle. Gilbert’s situation is completely understandable and relatable; he’s trapped and it’s realistic to the point of us feeling that stress from the film as well. Furthermore, it reminds us that we cannot blame ourselves for everything nor can we change every single aspect of our lives. All we can do at times is be patient and live through it.

On a closing note, I’d recommend for you to watch this film just once, (due to it being a ‘classic). Although the cast and message of What’s Eating Gilbert Grape were fantastic, the flow of the plot will continuously poke you with a spatula during the duration of the film. I think this film received such a high score merely because of the moronic idea that ‘dramas should always receive the best markings.’