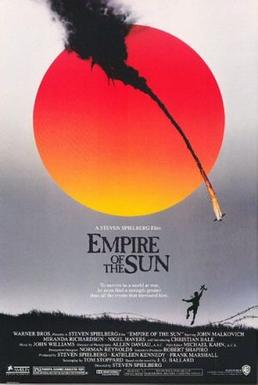 Steven Spielberg has long been praised for his myriad of excellent work. Considered to be one of the founding pioneers of the New Hollywood era, Spielberg never disappoints with his limitless works of imagination. Having said that, I found it surprising that Empire of the Sun is not mentioned as much as Spielberg’s other work. It was only at my uncle’s suggestion that I finally decided to watch the film.

Set during World War II, Empire of the Sun follows rich English boy, Jamie Graham,(Christian Bale) living in Shanghai when the Japanese invade. In the heist of chaos, Jamie is separated from his parents and meets American sailor Basie (John Malkovich). It isn’t before long that the Japanese force all foreigners into prison camps, with Basie looking out for him. In spite of dire circumstances, Jamie maintains optimism as he progresses through his stay at the camp alomg with similar conflocted folk. In this inspiring coming-of-age tale, spoiled Jamie journeys into adulthood as he learns lessons in dignity, loyalty, freedom, and hope.

The theme of the loss of innocence has been explored many times in cinema before. However, it is with Spielberg’s unique method of storytelling in which Empire of the Sun succeeds as a classic. For Empire of the Sun, Spielberg opts to narrate the story through the eyes of a child. Because of this, the film is a visual work of art—of wonder and curiosity.

“Jim, didn’t I teach you anything?” “Yes! You taught me that people will do anything for a potato.”

Jamie initially starts as a spoiled brat everyone would want to smack across the face, but grows into what is essentially a man trapped in a child’s body. It is through the circumstances Jamie endures in which he proves himself to be a strong individual; he maintains an optimistic spirit and a smile throughout his years of staying at camp—aweing the others. He even learns to construct his own thoughts and opinions on matters such as the war. No longer does he idolize either side, as he sees the true horror of both sides of the war. One could describe him as a beacon of hope for the other adults. Although this may seem a bit unrealistic, Spielberg excellently executes the truth beneath Jamie’s façade as he begins to let his mask of sanity slip, (American Psycho reference, ayyyy). This allows the audience to really understand the destruction of innocence inflicted upon Bale’s character.

“Learned a new word today. Atom bomb. It was like the God taking a photograph.”

Speaking of Bale, I was mesmerized by Christian Bale’s acting in this flick. For a twelve-year-old boy, Bale accurately expresses all of Jamie’s conflicting emotions. More so, Bale also captures Jamie’s fleeting moments of childhood innocence, such as his love for planes. I was really captivated by Bale’s performance in this flick to the extent of thinking that twelve-year-old Bale actually gave a better performance than some of his adult roles. *hint, hint SPOILER* The whole “AHA! P-51 Cadillac of the skieeeeeess! AHAHAHA” scene transitioning into a broken shell of a boy tearing, “I can’t remember what my parents look like,” really hits home.

Having noted the positives of the film, there are only a few aspects in which I felt Spielberg could’ve done better on. The first aspect is the plot. The story, while good, seems to lack an actual sequence of events. It’s more of a ‘going-with-the-flow’ premise as it documents Jamie’s day-by-day life in the prisoner camp. Furthermore, I felt as if it were a bit slow in certain places. The ending of Empire of the Sun also felt a bit rushed and wrapped up too quickly. Lastly, (although it may seem tedious), Jamie’s lack of aging bugged me, ha. I know, I know, they couldn’t magically poof Christian Bale into a *deep voice* manly-man. But if Spielberg expected me to think that a thirteen-year-old did not physically grow over the course of years, the guy needs to wipe his glasses and peer through them again to see how the rest of the world would look at it.

Some complained about Spielberg whitewashing the film and not showing how the Chinese had suffered at the hands of the Japanese. The thing is, the film is from the perspective of a single boy; Spielberg is not disregarding the struggles of the Chinese. But imagine if he were to incorporate every view others would’ve wanted into the film. It’d be immensely cluttered, no? Furthermore, few have taken on the task of showing the perspectives of the English in China during WWII. English foreigners in China: a rare and interesting take.

“I can bring everyone back. Everyone.”

Empire of the Sun is notably different, (in its own sense), from many of Spielberg’s other films. It’s a shame this treasure didn’t garner as much attention as it should have done. Sure, critics appreciated it, but to this day, few people recognize it as one of Spielberg’s prized possessions. From the music, the acting, and the dazzling effects, (done by hand with no cgi!), Spielberg and Bale create a phenomenal atmosphere that brings this tale to life. Highly recommend!