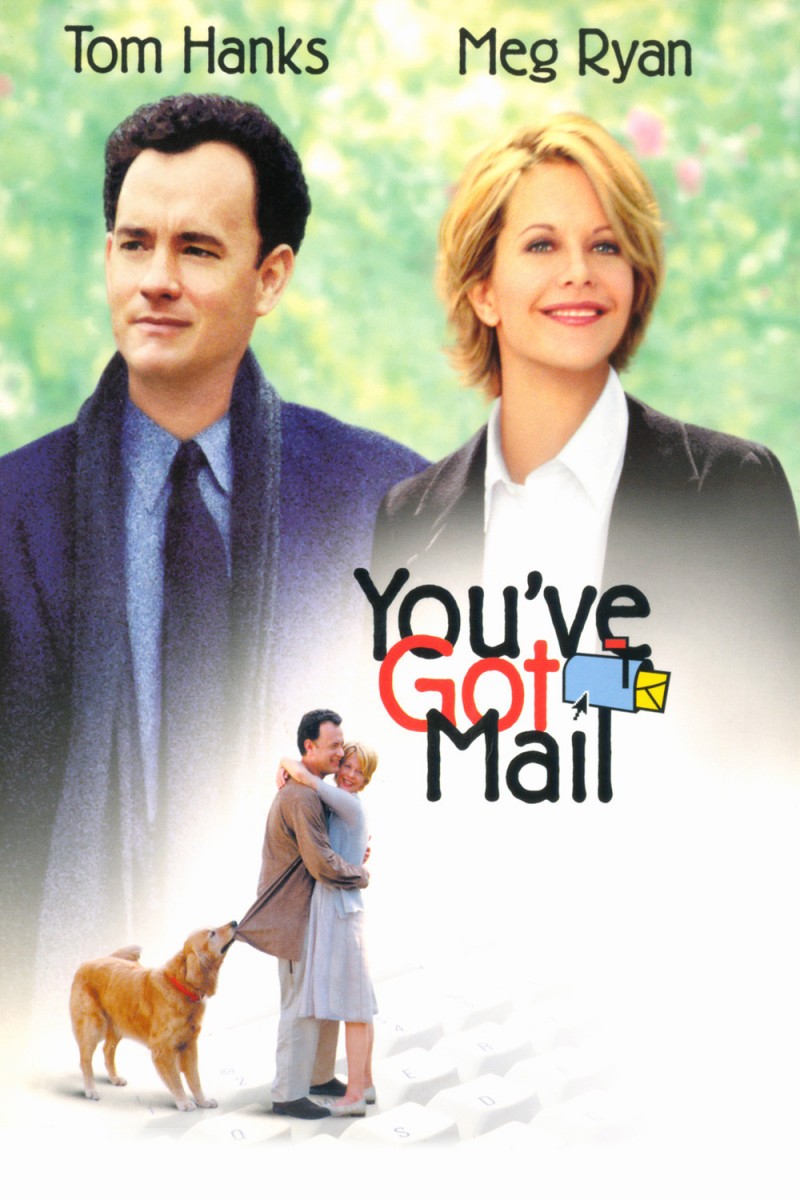 Today, Hollywood seems to be bland in movie ideas. But what if I told you that a while back, there were actually good movies afloat–especially romantic comedies? I always remembered my mom watching You’ve Got Mail back when I was a kid, and especially how she was really fond of it. Having grown up, (and because it was coincidentally on TV), I decided ‘why not?” and sat back and watched the film for the first time.

Directed by Nora Ephron, You’ve Got Mail follows struggling boutique bookseller, Kathleen Kelly, (Meg Ryan) and the owner of a corporate book-chain that has moved in across the street, Joe Fox (Tom Hanks). To put it bluntly, the two hate each other in person. But little do they know that they are each other’s Internet sweethearts that have been exchanging emails for quite some time now…

Not much bothered me about the film. But one thing that particularly got to me was the technical emotional cheating going on. In the midst of email exchanged as the film opens up, it is revealed that both Kathleen and Joe are in relationships—yet they are engaging in a peculiar Internet romance. Although the ‘cheating’ is discreet, I was able to pick up on it and well—it friggin’ sucked.

“When you read a book as a child, it becomes a part of your identity in a way that no other reading in your whole life does.”

The second thing that I wasn’t really a fan of was the extent of Kathleen and Joe’s unrealistic relationship. Considering this is a spoiler-free review, let’s just say that forgiveness is unrealistic in the film’s climax—at least when it comes to real-life adult reactions…

You’ve Got Mail is deemed by many to be a classic, and I completely understand why. Released back in the 90s, this was when Hollywood was still innovative and full of ideas. The plot-line itself is cute, clever, quirky, and original (at least to my knowledge). The romance is sweet, innocent, and relies on the characters’ personalities rather than being overly sexual as depicted in many of today’s films. Because of this, the peculiar type of innocence featured in the film is refreshing like a fresh bouquet of daisies. Not to mention that the pacing of the plot was delivered well—not too slow, not too fast.

“Brinkley is my dog. He loves the streets of New York as much as I do, although he likes to eat bits of pizza and bagels off the sidewalk and I prefer to buy them.”

I’ve got to say, the cast of You’ve Got Mail was perfect. Tom Hanks and Meg Ryan bring life into their characters. Plus, the chemistry between the two is just great. Nowadays, two ‘hot’ actors are lumped together into a movie despite not knowing what the hell they’re doing. But back when Hollywood was actually considerate, it made sure to get every detail right. It’s especially a shame that Meg Ryan hasn’t been getting any roles for a while now…

We are also reminded of the advancement of technology and how far we’ve come as well as how far we continue to go. It’s sad, nostalgic, and yet prompts us  feel more appreciation for memories that continually float by as time passes.

“I hear nothing, not even a sound on the streets of New York. Just the beat of my own heart. I have mail – from you.”

Overall, I really enjoyed the film and can absolutely see why many deem You’ve Got Mail to be a classic. From the pacing to the exceptional cast, it’s movies like this that make you feel nostalgic for the 90s and quality film and art.