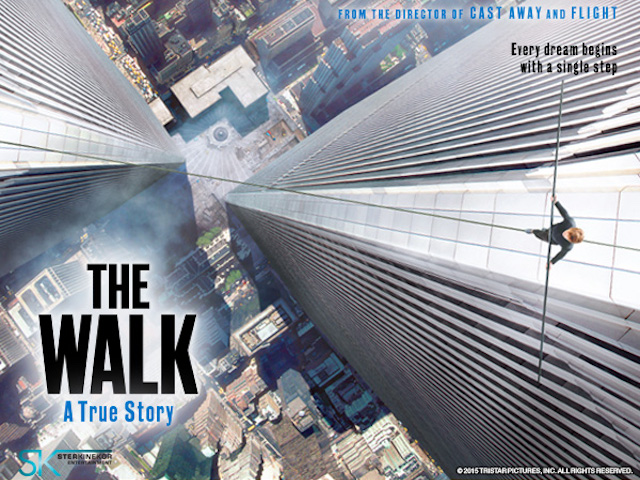 Hollywood sure comes up with the crappiest ideas nowadays. Either it’s sequels or dull story-line plots. The Walk had a fairly odd plot-line, but was it one that succeeded?

Directed by award-winning Robert Zemeckis, (Cast Away and Flight), The Walk stars Joseph Gordon-Levitt as real-life Frenchman, Philippe Petit, who dreams of performing chilling high-wire walks for dazzled crowds. After he attains his dream with the help of his mentor Papa Rudy (Ben Kinglsey), Petit soon realizes that his life’s ambition calls for a more daring stunt: walking on a tightrope attached to the north and south towers of the World Trade Center. With the help of Papa Rudy along with his friends (Charlotte Le Bon, James Badge Dale, Be Schwartz, and Steven Valentine), Petit prepares himself for the death-defying act on August 7, 1974.

“Edmond, could we reconsider… give him one more chance?” “No, the carrots are cooked.”

Despite Joseph Gordon-Levitt being a great actor, he seemed to have momentarily lost his spark in The Walk. He’s still humorous and cute with his wee little dimples, but his portrayal as a Frenchman is not believable. From his appearance (the terrible blue contacts), to his French accent, (I had initially mistook him for Asian during the opening credits), Gordon-Levitt could have done much better at preparing himself for the role. Don’t get me wrong, Gordon-Levitt is still stunning, (as he does a good job at displaying the mischievous, calculating protagonist), but he appears to have fallen a bit in his role as Phillippe Petit.

“Why did you do this?” “There is no “why.” Just because. When I see a beautiful place to put my wire, I cannot resist.”

Another negative aspect of the film was the climax. Considering this is a spoiler-free review, let’s just say that I felt that the climax could’ve been better—more intense and interwined with emotion, I should say. It’s still amazing; I felt in complete serenity and bliss with Petit as he was walking the skyline. But I also couldn’t help but feel that it should’ve induced more uneasiness from the audience. I believe that the second slow half of the plot may have had to contribute for that…

Positive: the progression of the film. The film is not bombarded with a bunch of useless subplots. Rather, Zemeckis cleverly follows one line of thought—one focus. He only focuses on Petit’s dream of walking the tightrope between the two towers and depicts his actions towards achieving that dream. Honestly, I found it impressive that Zemeckis found a way to make a film out of, (to put it bluntly), a guy walking a rope without putting his audience to sleep.

Another positive would definitely be the cinematography. Zemeckis, known for his visually stunning films, continues to carry on this tradition with The Walk. Honestly, it’d be a disgrace if I didn’t talk about it. From the beginning scenes (composed of a jazzy, beatnick, and metro feel with dashes of color), to the amazing skyscraper scenery of the cinematic climax (hey, it’s still good), Zemeckis did a great job with this. I especially liked the skyscraper scene where it was beautiful to be able to see the view of New York City from Petit’s eyes—nearly otherworldly!

“I find myself in the middle of the wire. And I feel the void. And although a wire-walker should never look down… I do. And it was… It was beautiful. It was calm and beautiful, and serene, and “not-dangerous.”

Overall, I thought the film was good—that Hollywood pulled an interesting take on making an actual plot out of a seemingly meaningless story. If I still haven’t been able to convince you to watch The Walk due to its plot-line, at least watch it for its astonishing cinematography then.