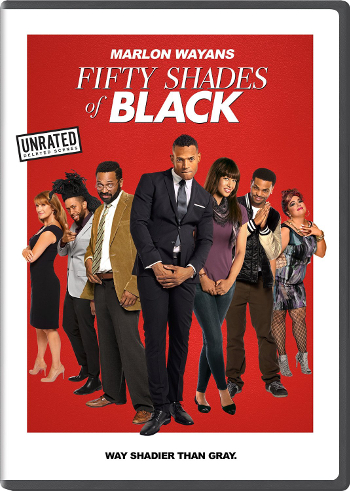 We’ve all heard how painfully cringe-worthy the original Fifty Shades of Grey series was. So then that meant a Fifty Shades parody AND Marlon Wayans must make for a hilarious combination—right? RIGHT?

In Michael Tiddes’ flick, the plot follows Hannah Steele (Kali Hawk) interviewing millionaire-entrepreneur, Christian Black (Marlon Wayans), for her school newspaper. Flirtation leads to attraction, and attraction leads to a Christian’s dark world of S&M. With their different backgrounds, how far will the two go to make their relationship work?

If the plot already made you roll your eyes, strap yourself down (no pun intended) because there’ more! (JOY).

Marlon Wayans was that one guy you did not want to miss in comedic hits, such as White Chicks and Scary Movie. High status in comedy? Check. Plus, Wayans was also versatile in the sense of being able to reveal his talented, dramatic side if he put his mind to it (Reqiuem of a Dream, I’m looking at you.)

So think about this: Marlon Wayans + parody of one of the most idiotic films ever = you thinking “hell yes! I’ve got to see this.” Right? Here’s the reality: Upon watching the first five minutes of the film, I was internally crying–wondering when this flick would be over,  the single reoccurring thought in my mind being, “Dude, what happened?”

Why and how is it all that terrible as the pretentious writer of this article is making it out to be? Well for starters, (and in a nutshell depicted the general film), Fifty Shades of Black is a mash of lame gags, boring humor, terrible sex jokes, and unfunny one-liners all recycled from the bottom of a trash can. I’m sad to say that gone are the days of  the original fiery hilarity from Marlon Wayans, (or let’s hope that’s just the case with this movie). Nearly all the jokes in the film were painfully banal and expected, having been used way too much in other spoofs to the point of not holding any comedic merit whatsoever anymore. It was especially painful to watch the jokes fall flat on their faces when the audience could tell that this was their cue to supposedly roll off the couch with their bowl of doritos laughing and rolling around on the ground like a struck pig. See? Even I can make a better joke–and I’m not all that funny. 😉

ANYWAYS, an additional cringe factor was the acting. My GAWD! I get that it’s supposed to be a parody and oh-s0-ha-ha-ha. But I thing is that they still had a budget for this film to hire decent actors. The acting felt like the director had plucked some random suckers off the street and had goaded them into filming a cheapie commercial in promise of a clump of lollipops. Pretty bad, no? Bad acting normally doesn’t faze me as much as it does compared to other audiences, (except The Room-don’t you forget that movie! 😉 ). But in this film? …Let’s just say that in that case, where’s my 6-year-old sister’s trophies?

As for the story–well, the original Fifty Shades was pretty much devoid of one–so you can guess where I’m going with this one here….

Overall: terrible acting? Check. Terrible dark humor, (even though I love dark humor? ) Check. Worse than the original Fifty Shades of Grey? Check-a-rooni. I had really hoped that this was one of those parodies that would remind you why parodies were hilarious. Unfortunately at the end of dragging myself through what seemed like 3 hours, (despite being half of that), I couldn’t wait to go to sleep.

Ultimately, I think the parody would’ve worked if the humor was “new”–or at least had its own take on the classic gags of comedy; the  film would have at then reached its goal of being classified as a “comedy.” Getting a better cast would have also been a great improvement.

Closing Thoughts: I’m sorry, Marlon Wayans, but you know the film’s terrible when it ends up being worse than the original garbage it was supposed to poke fun at. Other expecting to get a single laugh out of this flick, get ready to enjoy cringing at both its stupidity and yours for deciding to watch it. ;(

Final Verdict:  Congrats, this is the first “D” I give out.