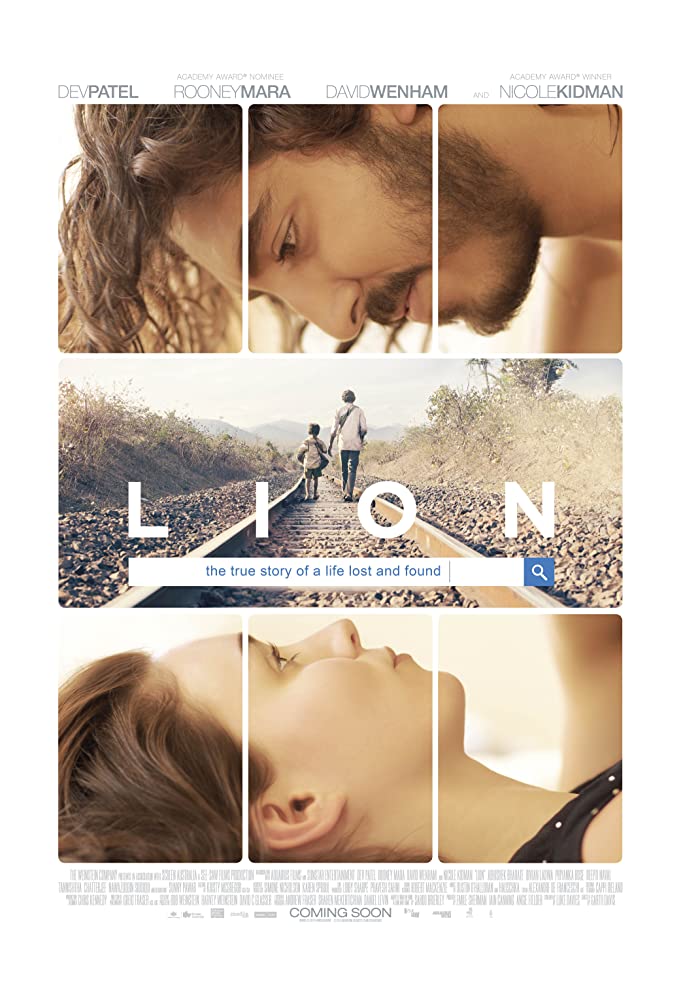 2017: New year, means this girl’s finally gonna post some reviews on new movies, right? Yes sireee. For today’s update, I will be reviewing 6-time Oscar nominee, Lion. I know what you’re thinking. “Whoaaaa, it won six Oscars?” No little petunia, see that’s where you’re wrong. I said nominee, not winner. But even so, it sure as heck is a winner in my eyes.

As a side note, Lion is based off the non-fiction book A Long Way Home by Saroo Brierley with Larry Buttrose. Directed by Garth Davis, (in his feature debut), the film follows five-year-old Saroo (Sunny Pawar) getting lost on a train, separating him from his family (Priyanka Bose, Abhishek Bharate) thousands of miles across India. But Saroo’s adventure doesn’t stop there. Saroo soon faces the possibility of adoption by an Australian couple (Nicole Kidman, David Wenham) and the heartache of growing up without his beloved home or family. Twenty five years later, armed with only a handful of memories and the support of his girlfriend (Rooney Mara) and other friends, Saroo (Dev Patel) must make the ultimate decision of whether he’d like to find his lost family.

Alright, I’ll admit that it sounds pretty general and cliche–something you’ve heard of,

right? Well regardless, there’s two things I want to say. One: it’s a biographical film based off the true story of Saroo’s life. (So maybe it seems familiar because you’ve come across the story in the news or something?) And two: Even if it seems cliche, keep reading because I promise I’m getting to a point.

One of the main aspects of the film that captured my attention was the beauty of the simplicity of the story. A kid gets separated from his family. Pretty typical, right? See, but that’s the thing–the story-line is simple, yet still captures your attention and has you rooting for Saroo because of the emotions, struggles, and pay-offs packed into the story. From a screenwriter’s perspective, this is because the film is correctly structured in the context of its eight sequences, climax, resolution , character desires and conflicts, etc. But from the average viewer’s perspective, this is because the story flows in which everything slowly and gradually intertwines with each other so that the drama and emotion is rightfully earned from the audience as opposed to being falsely mimicked/generated.

One example of what I mean is that in some films, they resort to depressing music in order to manipulate the viewer into crying. But over here, it isn’t so. Sure there’s music. But the keynote is that it doesn’t become overwhelming to the point of depending on it to carry the scene.

Another example of one of the fine aspects of this film is the acting. With this being my first introduction to Dev Patel, ( aside from hearing about him in Slumdog Millionaire), I’ve immediately been able to recognize him as a fine actor. Nicole Kidman manages to radiate talent and class as always. But the actor who will forever allow Lion to be remembered is Sunny Pawar. Sunny Pawar immediately lights up the screen with his playful smile that immediately generates adoration from the audience. But Sunny’s not only good at looking cute. He’s good for realistically portraying the varying spectrum of emotion a five-year-old would likely react towards getting separated from his family. And in doing so, he garners immediate sympathy  from the audience–which is what films sometime fail at doing. Furthermore, snippets of scenes spent with his mother intermixed with the film allow the viewer to practically touch the palpable, beautiful maternal bond he shared with his mother and is able to elicit an empathetic distress from the viewer.

“Do you have any idea how it’s like? How everyday my mother screams my name?”

Aside from being a splendid film, the one thing that may induce criticism from its viewers is the pacing of the story. Lion certainly has an impactful story-line. However, I feel as if Davis’s flick would have been even better had it improved its pacing towards the middle of the film. Everything leading up to this point of the film has been meaningful and logical. However, things begin to take a long halt when Saroo, (twenty-five years later), has to make the decision of whether he has to pursue his lost family or not. Davis spends an incredible amount of time illustrating Saroo’s pondering. Sure, the decision is extremely important–I get that–but the tedious shots of Saroo staring glassy-eyed at walls thinking “should I, should I not?” only causes the viewer to fume at his indecisive, snail-like productivity rather than the tension that Davis may have been steering towards.

Closing Thoughts: Lion is definitely a film worth seeing. Although I cannot say why it lose to other films during the Academy Awards, (I haven’t seen them :/ ), I can see why it was nominated in the first place. Even if drama isn’t your genre, it’s still worth at least one watch. Deeply touching and heart-aching, I’d recommend that you watch this in a calm mood or at least prepare yourself for the inevitable tears that may come your way whether it be your eyes slightly getting watery or your transformation into a blubbering whale. 😀