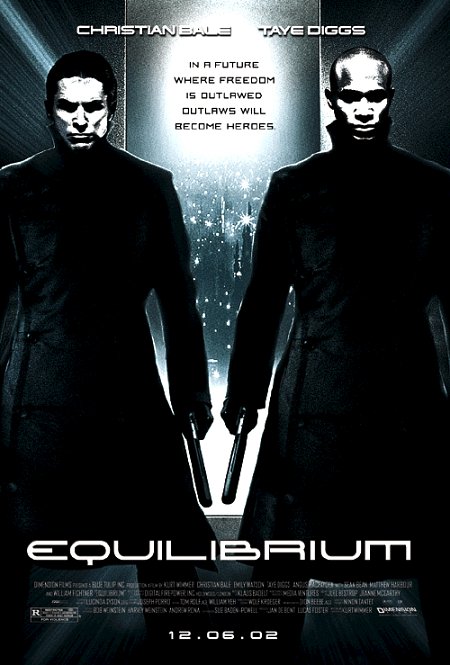 I had heard so many mixed reviews about Equilibrium. Some said it was a classic hit, others said it was a Matrix-wannabe. And with it now gone as I write this, I was luckily able to give the flick a try before getting removed from Netflix.

Directed by Kurt Wimmer, Equilibrium follows a futuristic world in which all wars have been eliminated as a result of society opting to suppress emotion. Everyone is forced into conforming lifestyle of taking their emotion-suppressant drug, “Prozium,” (as experiencing emotion is a crime punishable by death). Furthermore, all things books, music, art, etc. are banned and also punishable by death, as it is believed these mediums elicit figments of  the human spectrum of emotion. Clerick John Preston (Christian Bale) is a top-ranking government agent responsible for executing those who resist these rules.  But when he misses a dose of Prozium, Preston suddenly grows aware of the world he lives in.

“But I, being poor, have only my dreams. I have spread my dreams under your feet. Tread softly because you tread on my dreams.” I assume you dream, Preston.”

The flick has a pleasant opening narration and explanation of the society Equilibrium takes place in which it is concise and easy to follow along. Even those who aren’t into sci-films, considering them to be mind-boggling, are able to understand the sequence of events that have kicked off the film’s story-line. But despite the film seeming ok at this point, things began to take a trip downhill as the movie progressed.

One of which, were a number of plot-holes that were difficult to overlook. If you’re one that can withstand plot-holes, skip ahead to the next paragraph. If not, bear with me. Although there are many  plot-holes anyone can easily point out, my favorite is why does a  society that characterized as being extremely high-tech and elite not have security cameras? Seriously! This would have eliminated so many I-wonder-who-murdered-who cases rather than going off on a wild goose chase looking for the perpetrator.

Another factor of the film that could have been improved was eliminating cheesy scenes of the plot that attempted to elicit emotion from the audience. Aside from failing to elicit  whatever intended emotion and empathy the scene called for, Wimmer’s coupling of lame cliches didn’t do Equilibirum much justice. Instead of eliciting emotion, I can sure tell you what it elicited from me: eyerolls complimented by my weird guffawed laugh. Here’s a hint of what I mean: one scene includes an off-his-meds Preston, puppies getting shot, and our main homeboy obviously in distress watching the scene…really? 0____0 I mean, yeah, everyone loves puppies, but are you really going to resort to that cheap trick? Plus, according to Preston’s logic, seeing people getting mercilessly shot is inferior to puppies getting harmed. Oh the puppies! Not the puppies! Not saying that I don’t love puppies because I do…but nice one, Wimmer. But then again, if you don’t take these sorts of things seriously, you can have a little fun with it–even grow to love the classic gimmicks of the film which is part of the reason why others love it.

“I’m not feeling! He is the one who’s feeling!”

The plot is also troublesome in its structure: choppy plot development and a lack of clear focus. Because of this, the story tends to drag and flutter around a bit, (including the unraveling of an actual solution). It had me wondering, “Ok, we have an idea, but where and when are we going to move this along?” Honestly, it felt like they wrote the story on the spot as they filmed it. Even the ending felt like it was wrapped up too quickly. Rather than providing the audience with a well-deserved emotional climax, the ending blends in with other action scenes in which it isn’t anything special.

Moving on the action portion of the sci-fi thriller, personally, I had mixed feelings about the Gun Kata (think slow-mo matrix action, kung fu, and guns). If you’re fun of such action, the film might be for you. But if you’re feeling kind of shaky about the fighting style, I feel it. On one hand, it was lame, (with terrible CGI), on another, I give it props for being unique. However, it was also unrealistic. For example, when Preston is fighting a band of opponents, somehow not one enemy can swing at him from behind while he’s busy fighting off another even though Preston’s ganged up on. I  understand that Preston is supposed to be around the top of the hierarchy, but we can’t forget realism. I mean, while one person was fighting Preston, couldn’t have another struck him while he was distracted rather than waiting for their turn? Furthermore,  for an action flick, Wimmer could have included more action scenes since there aren’t too many, (at least ones that last for a fair period of time).

As for the characters of the film, I definitely thought they could have been better. Aside from the cheesy dialogue no one would use, Bale’s character is a cluster of contradiction. Preston is repeatedly lauded for his intelligence, and yet as a high authoritative figure, he makes the stupidest mistakes—especially ones that could be fatal. If this guy really lived in a dangerous, hazardous society, why is he this negligent?

The acting was mediocre. Christian Bale was great as usual. But there were definitely other actors that could’ve honed their craft. Emily Watson, for example, (Mary O’ Brian: a woman that is awaiting trial for feeling), yeah, brush up on your skills, lady. Another acting aspect that could have been improved is the portrayal of emotionless beings. In Equilibrium, way too often was the occurrence of people showing emotion, (smiling while shooting someone, fearful, etc.), even though they were supposed to be emotionless. I’m sorry, but ha–what?

Despite the negative aspects of the film, I felt like the music was mention-worthy: unique yet beautiful in the appropriate places. There is a particular scene where ****SPOILER**** Preston discovers a room full of music, art, and books. There, he listens to the 9th Sympathy and just like that, it hits him as well as the audience the true power of the lingering humanity within the arts—and how it can come crashing down on us. Melancholic, original, and beautiful.

Another aspect I really enjoyed the various messages portrayed in the film, such as individuality versus conformity and a power struggle. Furthermore, Equilibrium makes us think about emotion and our human link to it. After all, once people say emotion is unacceptable, how far will we go?

Lastly, the imagery of hands featured in the film was a nice touch by Wimmer. Hands are often tied with feeling—both physically and emotionally as they stride along with us through our daily lives and experiences of sentiment. Makes for a great motif.

I had mixed feelings about the flick. Many had said that Equilibrium borrowed too many elements from other films and even novels. I didn’t care for it at first. I thought, “well, maybe they’re making a nice tribute.” But after I had read the summaries for novels I was interested in, (not going to mention them here), I was a bit disappointed in seeing it was true to an extent. And it was a shame, considering the idea of emotion is such a fascinating concept. If you’re like me and make the mistake of taking things too seriously, this film’s only worth one watch. However, if you’re in the good habit of watching films for fun, and enjoy guns, kung fu, and matrix-like action effects, then I can see why people consider it to be a classic.

Should the movie be watched seriously or for fun?: Fun

Final Verdict For Seriousness: B- 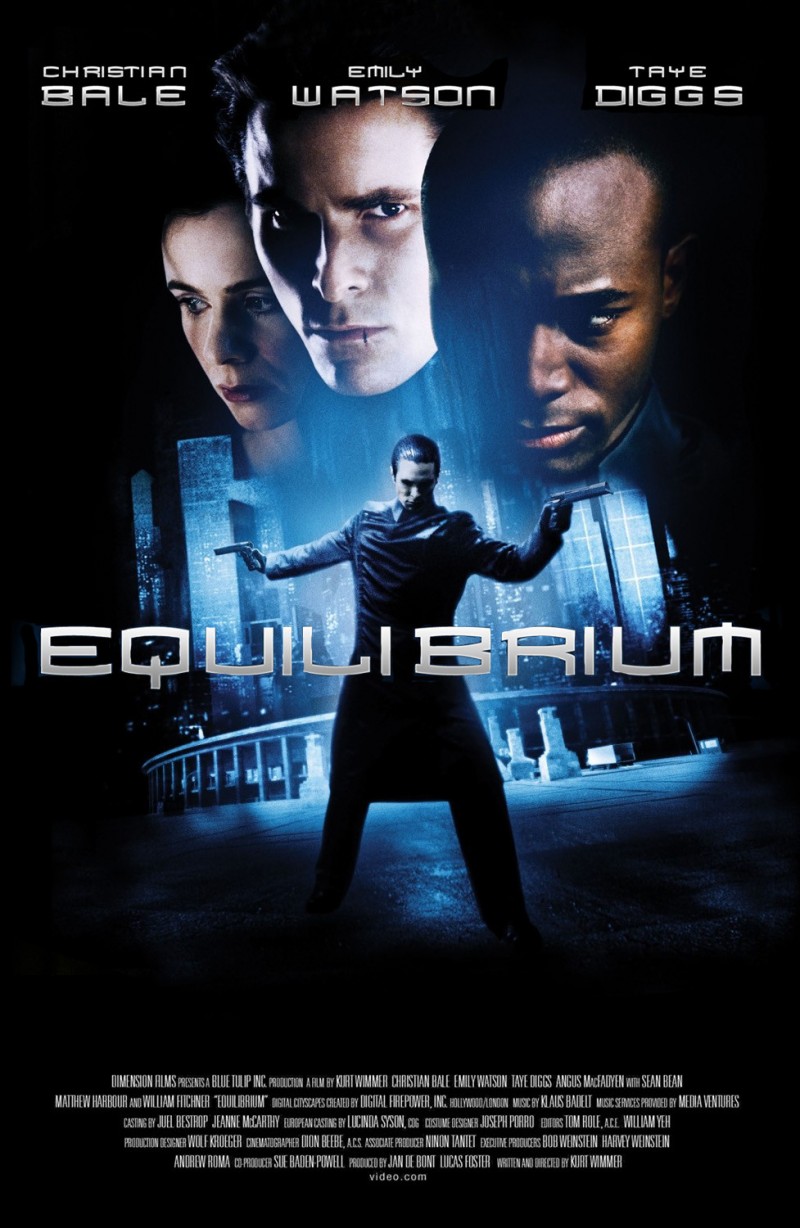