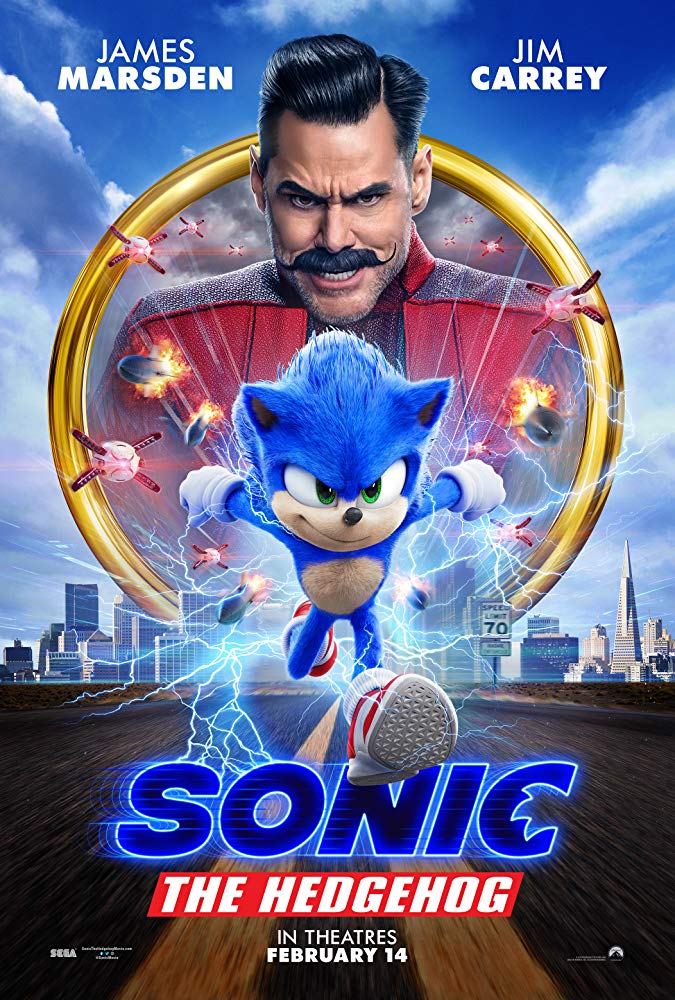 I don’t like video game adaption films. Why? Because they’re usually badly adapted flops; They don’t follow the source material, they fall apart around the middle of the film, they’re very cliched and boring, etc. There’s a myriad of reasons as to why I avoid them. That’s why I went into the movies with very low expectations for “Sonic The Hedgehog.”

“Why do you keep calling me Donut Lord?”

Production on the film started all the way back in 1993, however a lot of tugging and pulling resulted in Sony Pictures acquiring the rights in 2013, placing the project in turnaround and having Paramount Pictures subsequently acquire it in 2017, and a character redesign in 2019, (after an overwhelmingly negative reaction to the first trailer), and the film was finally released on February 14, 2020. One would think that such an immense load of postponement would signify an omen of failure. But after this review, let’s see if you agree with that omen.

Sonic, (Ben Schwartz), teleporting to Earth, (via a bag of magical rings), to avoid a tribe of echidnas from abducting him for his supersonic speed power. Sonic then lives in secret for the next ten years in the town of Green Hills, Montana where he idolizes the local sheriff, Tom Wachowski, (James Marsden), and his veterinarian wife, Maddie, (Tika Sumpter), and wishes he could be a part of his family. Everything changes, though, when Sonic and Tom are forced to band together to prevent the evil Dr. Robotnik, (Jim Carrey), from capturing Sonic and using his powers for world domination. Typical good versus evil plot, right?

“Blue alien hedgehogs are people too.”

Right. However, it’s still entertaining thanks to various factors, such as humor, weaved into the film. It was so hilarious to the extent of it not even occurring to me to check my phone, (which I usually do, unfortunately, during a movie)! I’m telling you guys: The audience couldn’t stop laughing out loud. And random slapstick, sprinkles of mature adult humor, and Jim Carrey are the reasons for it. Don’t get me wrong, the overall cast was great, but Jim Carrey stole the show. He reminded me of the old, popular comedy films he used to do where he worked himself to his full potential. You can see him shine with life again in this role; He’s loving what he was doing, even if some of the tidbit source details were a bit off.

“You know what the problem is with being the smartest person in the world? Everyone else seems stupid.”

Sonic The Hedgehog isn’t one hundred percent true to the source material, sure.

However, it still cleverly connects the dots to present us with the characters as we know them to be, (example: Eggman and his wacky mustache). Plus, the references to the video game series in the film, such as the classic Sonic poses, locations, and character interactions make up for it. Hell, it made us nerds go crazy at the movies, which is why the film is worth it.

Sonic The Hedgehog has a simple plot that is overshadowed by its compelling elements of humor, simple, themes of loneliness, friendship, and purpose that won’t make you regret watching it. And what’s even more surprising is that it’s a PG film, which I was surprised by, considering many tend to be bland and/or lame.