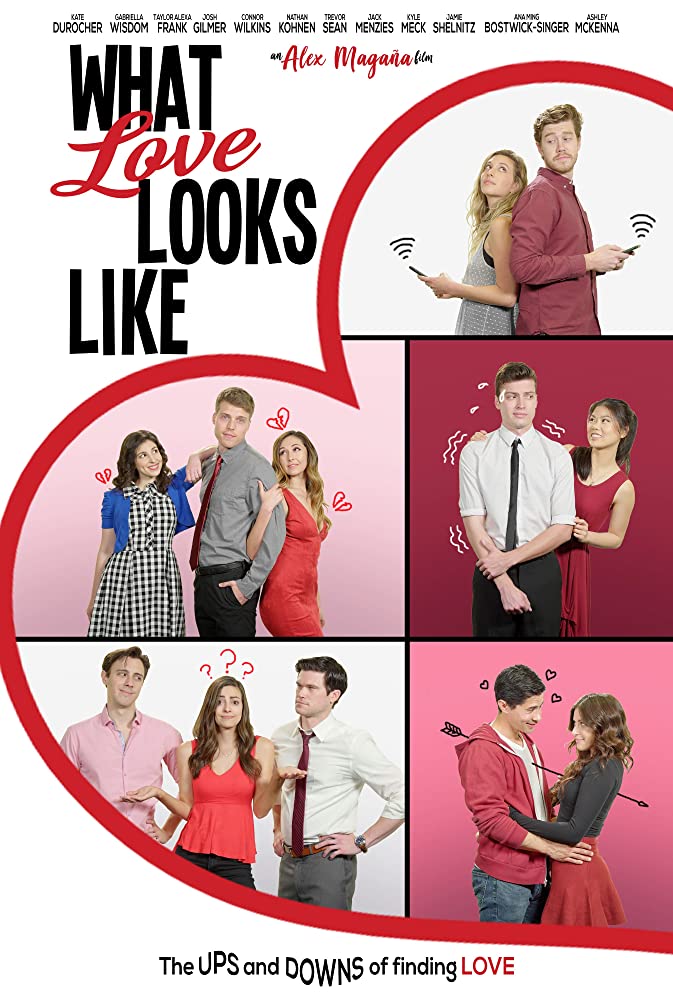 Rom-coms are tricky. Sometimes they suck, sometimes they rock. And sometimes, their ranking merely depend on one’s expectations and standards of a film. The same applies to Alex Magana’s What Love Looks Like.

What Love Looks Like is an independent film revolving around five parallel love. Nicole, (Kate Durocher), is a spirited young woman stuck in loveless relationship with Owen, (Josh Gilmer), a guy who’s more transfixed by his phone than by her. And to make things more complicated, she’s also pursued by the warm-hearted Jace, (Trevor Sean), who seems like a better chance at love. Calvin, (Connor Wilkins), has an awkward Tinder-initiated one night stand with Summer, (Jamie Shelnitz), in which he quickly departs after their encounter–only to ironically reconnect with her on an anonymous dating site. Finn, (Kyle Meck), finally finds love in Penelope, (Taylor Alexa Frank), but the timing couldn’t be any worse. Theodore, (Jack Menzies), is a painfully awkward, shy guy who’s smitten with equally shy gal, Bailey, (Ana Ming Bostwick Singer), after bumping into her at the park. And finally, Sam, (Nathan Kohnen), meets Evie, (Ashley Rose McKenna), and wants to fall in love once more, but is still reeling from his past love, Willow, (Gabriella Wisdom). And with that delineation of the film, it seems just like another romantic comedy, no?

Yes and no. When I watched What Love Looks Like, I was instantly reminded of other

Hollywood romantic comedies with multiple storylines such as Valentine’s Day or He’s Just Not That Into You because it shared many of the same aspects of the romance genre, such as parallel romantic stories, shy guys, down-to-earth girls, etc.. Furthermore, (as with any film), some of these aspects work, and some don’t. The narrative style, for example, has both pros and cons. Some people will enjoy it since it showcases multiple relatable relationship problems all at once. But others may not enjoy it since the multitude of simultaneous storylines  does not have the time to fully delve into them and flesh out something complex and rich, as the presence of a single issue would have allowed; This robs the stories of the chance to paint themselves as novel and unique–constituting a lack of originality, in which Magana’s talents do not reach their full potential. But never fear–there is a bright side of humor implemented into the film. Mr. Brightside, haha. Ok, I’ll stop.

The humor implemented in this film is original. It’s cheesy and awkward at times, (with some characters saying ‘Aw shucks,’ a tad too often), but it’s done in manner that you can’t help but find amusing. One may argue that some of the humor is lost via unrealistic dialogue. However, one may also counter-argue that such dialogue actually adds to its originality because it reminds you of conversations occurring in cheesy, yet lovable, 90s and 80s movies, making it fun and cute at times. But let’s not forget who to thank for the delivery of such lines: the actors.

The acting in this film is mixed. Some actors could work on honing their craft more since

they come off as being too rehearsed, poised, stiff, unnatural, fake, and/or unemotional at times. But the good news is not all of the actors are like that. Some, such as Kate Durocher, Trevor Sean, and Taylor Alexa Frank truly shine in the film and showcase their passion for filmmaking. They depict every eyebrow raise, gaze, intonation, body mannerisms, etc. that would be expected in a real-life scenario; You can’t help but notice glimpses of their sparkling potential present. This causes you to truly wish for the best for the actors and hope to catch them in other Hollywood flicks. Speaking of Hollywood, a film review isn’t over just yet until we talk about one last main aspect of movies: cinematography.

Like the acting in What Love Looks Like, the cinematography in this film is mixed. Sometimes the film’s shots emulate a student film, while at others moments, there are innovative and gorgeous shots. My favorite scene, for example, is when Finn and Penelope go on a date. In that scene, the focal point shifts from Penelope’s converse-cladded feet twirling across the Hollywood Walk of Fame to a low angle shot of her meandering through the luminous Urban Lights installment with Finn at LACMA. The vivid colors of the nighttime scene combined with the intermixed cuts of the marble pillars obstructing the two individuals on-and-off as they walk through the artwork is stunning. It really made me wish that Alex Magana incorporated more of that artistic cinematography into his film.

All in all, yes, What Love Looks Like has its flaws, but it should ultimately be given a chance.

Final Verdict: Worth Checking Out; Everyone Can Learn Something About Film From This 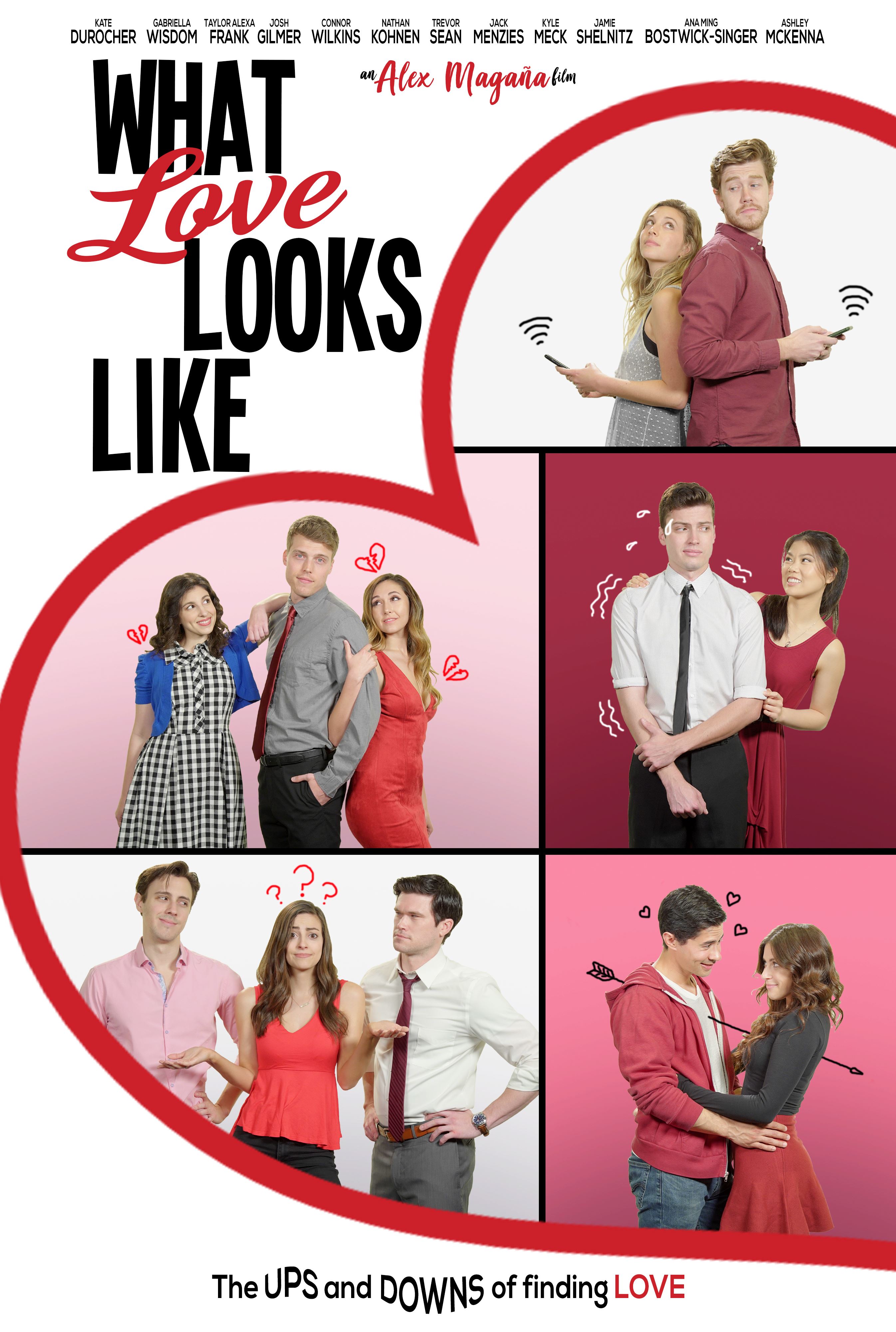