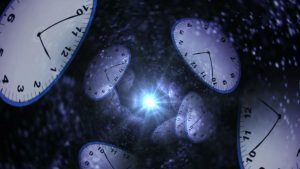 Note: This chapter takes place when Adam and Muntz, (the main characters of the story), decide to zap Einstein from the past into the present. Read on and enjoy!

Muntz  strolled  alongside  me  down  the  ruby-carpeted corridor, down the stairs, out the door, and into the garage. His place was so elegant and polished but lacked anything remotely resembling having a child. “Poor kid, Muntz probably forces him to be the next child prodigy or something.”

Muntz dialed a few numbers into the keypad. The door beeped and unlocked, and we entered the garage. I grabbed the checklist hanging off the wall and followed Muntz into the control panel room. He paused, looked around with a proud inhale and sighed. “You ready?”

Muntz flicked on a few switches, and the machine began to hum. He gazed down at the checklist. “Linear particle accelerator LINAC 2?”

I clapped my hands together. My rib cage was no longer being crushed by barbed wire. I could finally open my arms as wide as I wanted them and breathe in as much oxygen as I wanted to. My life was finally going to be right and worth living. All of the answers I’ve been waiting for years and years were finally about to be given to me.

I gulped. “Time to fire this bitch up,” I smirked, hoping to drown down my lingering anxiety.

Muntz hovered his hand over the Start button. “Oh, and a word of advice: watch your mouth around them.” I grinned and Muntz smashed the button.

“Baaaaaaank!” Baaaaaaank! Baaaaaaank!” A buzzer went off, the commencement chamber grew dark, and red lights flashed crisscross against the cavity. The humming in the particle accelerator chamber intensified. The red-numbered timer atop our controls glowed. We waited ten minutes until it dinged, signaling the proton beams’ powering up. The droning had grown to a deafening roar. Muntz and I fitted on our snug earmuffs. He then gestured a countdown with his fingers and pulled a lever. The roar vibrated to a twitching growl that thundered through the building and pulsated my sphincter esophagus. I glanced down on the map screen and saw the main power compartment glowing. We braced ourselves against the edge of the monitor table. Two luminous, gold proton beans jerked from the generator chamber into two opposite streams and collided. The force exploded into a catapulting blast that hurled us backwards. This wasn’t part of the plan!

I yanked off my headphones. “Muntz!”

He dug his nails into the table. Muntz administered the row of monitors and flashing indicators and looked back at me. “We’re good!” He yelled, giving me a thumbs-up, calming my panic.

The point of collision expelled a sharp, concentrated golden laser that beamed into the adjacent summoning chamber. A single, swarming dot rippled into the air, like a pebble dropping into a vat of clouded plum, sapphire, and golden paint. A smoky charcoal essence encompassed its edges.

The dot collapsed into a curved tube with a triangular end disappearing into space, producing a pitch-black portal. The smoke swirling around the portal increased in quantity and whipped around faster; a red crisscross pattern grid appeared on the tunnel’s edge. Something circular floated around the corner. I narrowed my eyes. It was a mesh of grey and navy. …Two halves consisting of grey and navy…And a tuft of white fuzz atop the neutral colors. My heart pounded, flooding my eardrums with blood. The back of my throat clotted and swelled. I snapped over at Muntz to find him already looking at me with the same crazed look I had. I glanced back at the wormhole and spotted the body coming closer.

The ringing buzzers grew to a deafening shrill and the flashing lights became more frequent and vigorous. The sound, the lights, the fear, the apprehension, the anticipation, and the disbelief drilled into my head like a slow-motion picture. It was as if all of this was too good to be true and something was bound to screw things up.

“Engines are a go-go, friend! All systems are in check. Don’t worry,” Muntz read my mind. I gave him a thumbs-up and grinned. I looked back to the scene, and the body was already over halfway through the portal—and then the very edge of the portal. He tumbled onto the cushioned floor of the chamber. I quivered in incredulity.

Muntz swung down the lever, killing the power. The flashing, rotating lights winded down to a few lingering flickers, the machine’s roaring died down to a rundown hum, and the alarms ceased. The proton beams thinned out and disappeared along with the wormhole.

Everything was quiet and still, except for the mists of smoke lingering and billowing along the cement. We turned off the screens and exited the control room.

Arising goosebumps sent a tragic thrill down my spine. “What am I going to say? What do I tell him? How was he going to be like? What would he think of me?” I shivered. Muntz looked ecstatic, his mouth ajar with a smile sprinkled alongside the corners of his lips, his eyes wide like a child told by his parents that he was going to Disneyland.

We stood outside the final door and took a deep breath, mentally preparing ourselves to meet him. “You ready?” Muntz asked. I nodded after a few seconds. “Here it goes…” Muntz dialed in the access code key and went inside. I tried to calm my nerves, but I knew no amount of mental preparation would suffice.

“Here we go.” I followed Muntz’s lead and placed one foot inside.

There he was with his wild, unkempt, fuzzy white hair, thick mustache, wrinkles, and large forehead: Albert Einstein. It was Albert-fucking-Einstein curled-up in a fetal position. Sixty-seven-year-old Einstein.

“Whoa.” I braced myself against the wall to recover from the momentary dizzy spell that inflicted me. I swatted the air to make sure that the dream wouldn’t fade away into the abyss. It was like a flame eating away a clump of ice crystal.

Muntz stood over Einstein’s body. “Come look,” he motioned me. He smelled of pipe tobacco, tea-stained documents, and a heavy abundance of the chemical compound, nonenal. I leaned over to look at his face. He was sleeping, (as expected). My skeleton jumped out of my skin.

“S-so should we carry him over to my bedroom for the time being? So, he’ll feel more comfortable when he wakes up— like we planned?” I asked.

“Ok,” I wrapped my hand around his ankles. “Ready?”

We both grunted, lifted Einstein up, and walked backwards out of the garage. We headed towards the back of the house and halted at the kitchen door. “Pass me the key.” Muntz balanced Einstein’s head on his thighs as he tossed me the key. I did the same, propping Einstein’s knee pits onto one of my thighs while I unlocked the door. We headed up the stairs and into Muntz’s minimalist bedroom.

“Ok, gently…” Muntz first placed Einstein’s head onto the fluffy pillow. “Gently…” I slipped the genius’s bare feet into the bed. Muntz slipped the covers atop of him with delicate fingers. I locked the door and window. Muntz and I then sat in wooden chairs on both sides of Einstein.

All we had to do was wait until Einstein woke up, and then the true adventure would begin.